HomeFired Up!Unexpected Events Can Turn Into Wonderful Blessings
AUTO NEXT

0
EPISODES:
Follow Your Dream! Live Like Most People Can’t. Make a Decision! Today Matters. How Will You Spend Your 24 Hours? Chase Your Dream and Support Your Passion – Inspirational A Good Leader Must Focus on His or Her Strengths Unexpected Events Can Turn Into Wonderful Blessings Committed People Are More Successful Than Comfortable People Producer Pitching – How to Do it the Right Way Consistent Schedules and Disciplined Habits Always Lead to Success How A Sense of Urgency Creates Success: It’s Got to be Life and Death Reach Your Success by Helping Others Are you comfortable with change? Pitching Your Script in Conversation 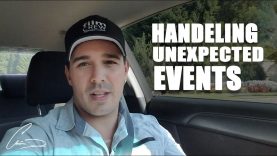 When the Unexpected Happens, You Have to Push Through

A lot of people think that because I was in Hollywood, and I was acting in movies, that I had it easy. I did NOT have it easy. I actually moved in 2007, and in 2008 was when, most of you guys know, the market crashed. Everything I had planned on accomplishing right away was put on hold, indefinitely! The crash was totally unexpected, and I found myself having to scramble to make ends meet.

And even though I was working in New York, I found myself jobless as an actor when I hit LA. That was definitely not in my game plan.

And, it was challenging! I knew what I wanted, I’d written down my goals and prepared and worked and studied.

But when writers went on strike in 2008, it was very hard to get work. So that’s when I found myself doing other things to make ends meet.

I worked in production, and it was then that I realized that it can be just as much fun behind the camera as it is in front of the camera. But if I had just lost all hope and let fear take over, I probably would have moved back to New York and not even given LA a chance!

Find the Blessing in the Unexpected

So I stayed. I didn’t let that fear take over, and I didn’t let doubt stop me from trying. And you know what? I started the ad agency back in LA.

Let me reiterate this: If I had let doubt take over, I would never have started my ad agency. I took something unexpected and turned it into a blessing.

You can do that.

If you guys are going after your goals in life and you face these unexpected events, keep going!  When you think everything’s going to be perfect and then all of a sudden, something hits you out of left field, don’t turn back.