HomeBlogHow to Cultivate Success with a Growth Mindset

How to Cultivate Success with a Growth Mindset

People often stare at me in shock when I tell them that I do not have a college degree. They wonder how I can talk about success and the growth mindset when I never walked across that stage.

In fact, what was your reaction when you read those words? Were you surprised, shocked, angry, confused? Chances are that like most people today, you were surprised!  We are taught from an early age that certain things define success. Money, big house, designer clothing, cars, college degrees, and so on.

But I didn’t have any of those things as I was growing up. When I decided to pursue school, it was for acting and advertising. I figured that I wanted to learn what I was passionate about. Now, I’m not saying that going to college is a bad thing: on the contrary! It’s certainly necessary for many professions, and it can be a wonderful experience, as long as you’re studying what you are truly interested in.

In this blog, I’m going to talk about how I learned to create my own reality and how you can too, with a growth mindset.

Do You Have a Growth or Fixed Mindset?

One of my favorite scholars and authors is a psychology professor at Stanford University who came up with the idea of Growth and Fixed Mindsets. It’s pretty simple really, but still, I see so many people STUCK in the fixed mindset, and that’s what is slowing them down on their path toward success.

Stuck in A Fixed State of Mind:

The Fixed Mindset occurs almost from birth. Children learn that certain actions mean they are smart. If they are better than everyone else, adults consider them smarter and more likely to succeed.

If we fail at a young age to walk or talk or sing or read before our childhood friends, people often label us “slow learners” or “not as bright” or “at risk.” Isn’t that crazy! Our society places labels on babies. From the time children can think, they already know whether or not they measure up to the standard.

Fixed means you are stuck in one place, not moving. So a fixed mindset means that you believe yourself to be at a certain level, and nothing you do will change that. Fixed also means that if you fail at something, you admit defeat and stop any further attempts because you do not want to risk failing again.

With a “fixed” mindset, those kids who were not labeled as “smart” would feel like they had to prove their worth, over and over again, so that people would accept them.

They would also shy away from anything challenging for fear of failing.

When I was just starting out in my career, I had to fight the urge to adopt the fixed mindset that everyone else had, because I knew in my heart what I wanted to do. It was a different path than most, but I just had a feeling that if I kept going and never even considered failure, then I would achieve what I wanted. Back then was when I realized how important it is to take action and stop worrying about pleasing everyone else and measuring up to a “fake” standard.

The only measure we should use to judge our own success is how happy we feel each day. That’s it!

Free to Explore with the Growth Mindset

The Growth Mindset is exactly the opposite of one that is fixed, as you can imagine. Think about when you were a child with crayons and paper. Did you care whether 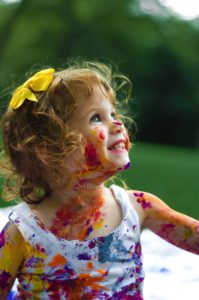 or not your picture could be classified as “art”? Were you worried, when you drew that house and sun for your mom, that she would notice that the lines weren’t perfectly drawn?

Of course not! When most kids draw, they do it freely, with joy. They proudly give their pictures to their parents, and then they move on to the next picture. With each picture, they get better naturally. And that’s where the magic happens.

When you don’t even consider failure and when you attempt something out of a pure sense of joy and learning, you will improve, will succeed, and will find joy in it. That’s a Growth Mindset.

How about instead, going after your dreams with a sense of wonder, and with an excitement in learning something new.

There is no failure. There is only doing and then doing it again!

I hope that everyone will start to think about the Growth mindset for 2018. You will discover that there is so much out there, and it’s all yours if you take it.

That is a lot of money to the local economy! Well done GA Film Business!

From Isle of Hope and Daffin Park to River Street, film and television sets were a familiar sight around Savannah and Chatham County in 2019.According to
View on Facebook
·Share

Chris DeBlasio is at King of Pops.

Nick Carse has built a FROZEN empire! Find out how the King Of Pops Co-Founder did it... on C-Level