Home#PitchChrisHow to Raise that First $, what do you do with your Headshots & getting A-list talent! #PitchChris
AUTO NEXT

How To Market Your Movie? Gauging Your Success? Making Your Script Most Attractive For A Producer?

If a producer tells you “NO” what do you do? #PitchChris | Chris DeBlasio

Timing For A Screenplay To A Movie? Getting Your Script Seen, Can You Break The Rules?

Can you earn and living while doing what you love? We say YES!

#PitchChris Episode 4! Get Feedback, Marketing your script and Contacting a Production House!

How to Raise that First $, what do you do with your Headshots & getting A-list talent! #PitchChris

Your Novel on Screen – How to Get Product Placement – Need a Literary Agent? #PitchChris Episode 8!

Should You Market Your Script Online?

How to Raise that First $, what do you do with your Headshots & getting A-list talent! #PitchChris 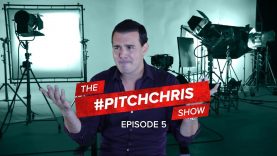 On this episode of #Pitch Chris, you’re going to find out how to raise that first dollar for your production. Should you send your headshots directly to a producer? And how do you attract A-list talent?

Hey, and welcome to Episode 5 of #Pitch Chris, where you guys are asking me questions about the entertainment business and I’m going to answer them. To ask me a question, simply go to my social media, @ChrisDeBlasio, #PitchChris, and I’ll be more than happy to answer all the questions you have.

This first question comes from Billy. Billy, let’s see what you have to say.

“As a producer just starting out, what is the best way to raise money?”

Another thing that I think a lot of people, they just want to jump right to A-list celebrities to bring a name to their project. You don’t necessarily have to do that. What you can do is you can find social media influencers that have a following and get them involved in your project. You don’t necessarily have to go right after the A-list talent all the time.

But I think if you start off with the people that you know first, your friends, your family, and then maybe source some social media influencers to then start building your project, I think that’s the best way to start raising that first dollar.

Product placement obviously is another thing I’ve talked about before. Going to advertisers, telling businesses that you’re doing a film, you need places to shoot. Instead of just going a straight barter, see if you can try to get some money for advertising from them.

A great question. I think that should help you a little bit on how to start getting some of those funds raised.

“I’m just starting out in production. What’s the best way to attract A-list talent in your movie?”

That’s a good question. Very similar to the question that I just answered. If you don’t have a name for yourself, it’s going to be a little bit challenging for you to attract A-list talent to your film if you don’t have any credits, you haven’t done anything in the past. Working with agents and stuff, they’re going to be looking at those types of things.

You’re going to want to start projects – and I mentioned this before – with social media influencers. A lot of people forget about the social media influencers, the people that have millions of followers on Instagram and YouTube and Facebook. You don’t necessarily have to go right after the A-list talent. Why don’t you find roles in your project that may be good for somebody?

Not only that, but on the financing aspect of it – a lot of these influencers have sponsors. They already have a relationship with a lot of these sponsors. So why not go about it that way? As opposed to going directly to an A-list celebrity, go to an influencer that has say Nike or somebody as their sponsor. Get them involved in the project, and then ask them if you can go and speak to their sponsor or whatever business is backing them to see if they would also support them in the film.

Now you’re also getting an influencer, but you’re also getting money that comes along with the influencer by having one of their sponsors in it. That’s another little angle that you might want to look at as opposed to going direct to A-list celebrities if you really don’t have a name for yourself. So I would say go that way and start building the project that way.

“I send my headshots to casting directors all the time. Should I start sending them directly to producers?”